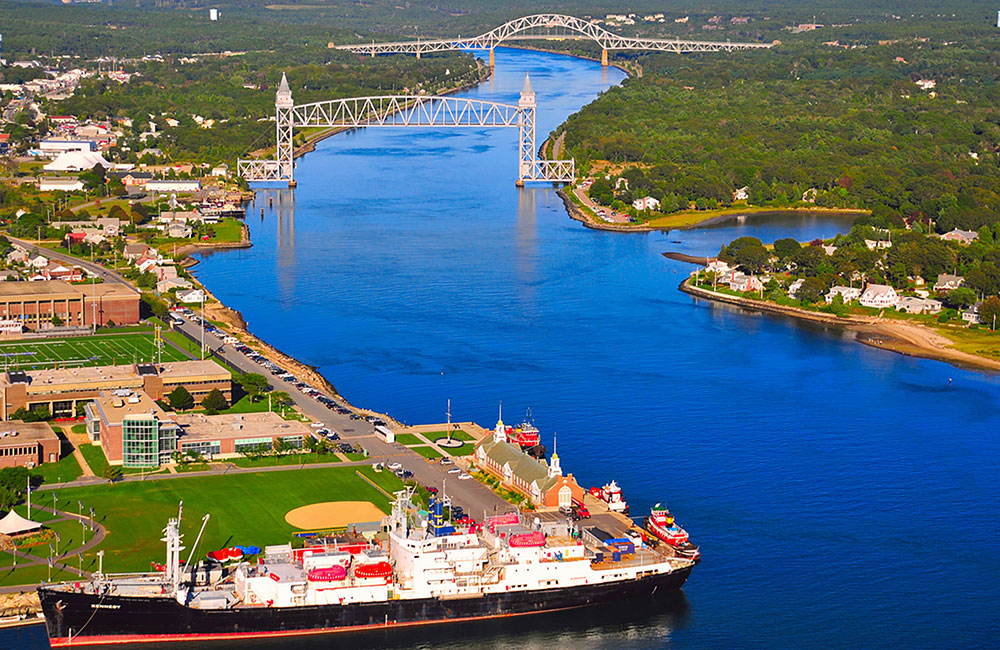 Welcome to Your New Neighborhood of Bourne, Massachusetts

The nearly twenty thousand people who call the Upper Cape town of Bourne home live in the gateway to Cape Cod, laying sleepily across the Cape Cod Canal. Occupying the upper part of Cape Cod, the town of Bourne, in Barnstable County, includes the villages of Monument Beach, Cataumet, Pocasset, Buzzards Bay, and Sagamore.

The Massachusetts Maritime Academy and Joint Base Cape Cod (formerly known as Otis Air Force Base) in Bourne, which is one of two Cape Cod communities, with Sandwich, that extends to the mainland.

Bourne’s location offers significant advantages to those who wish to reside on the Cape but must commute away from it for work. It is the closest Cape Cod community to the Bourne Bridge, the artery between the Cape and mainland Massachusetts, making it more convenient to reach Southeastern Massachusetts as well as Boston and other parts of New England. It also borders Falmouth and the ferries to Martha’s Vineyard.

The median income in Bourne is just under $70,000, while the average home value is a modest $350,000, making Bourne a reasonably affordable community.

In 1627, the pilgrims of Plymouth established a trading post in present-day Bourne to facilitate commerce with the Wampanoag Tribe, as well as the Dutch in what is now New York. The Aptucxet Trading Post Museum, just by the Cape Cod Canal, incorporates the earliest known elements of a pilgrim structure, sitting on the foundations of that 1627 trading post. The museum includes a grist mill, salt works, as well as a railroad station built specifically for the summer visits of President Grover Cleveland.

Elsewhere, a plaque commemorates Indian Burial Hill, a cemetery used by the Wampanoag Tribe until the nineteenth century. A meeting house for Christian Wampanoags, from the same era as the cemetery, is commemorated here as well. In 1765, Cataumet Methodist Church was built to serve a congregation of Christian Wampanoags.

Bourne has a very active Historical Society, and it operates a number of popular and important attractions. In Old Bourne Village you will find The Briggs-McDermott House and the Alonzo Booth Blacksmith Shop. The Briggs-McDermott House is the restored home of one of Bourne’s founding fathers and is an important feature of both Old Bourne Village and the Cape Cod Museum Trail. The Alonzo Booth Blacksmith Shop is a preserved and restored working forge and one of only a few of Cape Cod’s historical preservation sites that represents its industrial past.

The median home value in Bourne is just over $350,000. Over the past year, home values in Bourne have risen more than five percent, and that pace is not expected to fall off by much in the coming years.

Dining, Events, and Attractions in Bourne

Bourne inaugurated and for forty years hosted the Cape Cod Scallop Festival, a high point of the festival season on the Cape. The event has since moved to nearby Falmouth.

The Bourne Braves of the Cape Cod Baseball League enjoy broad support from the home crowds and baseball continues to be a favorite pastime in Bourne.

A number of picturesque hiking trails, including Cataumet Greenway and Monks Park,  are highlights of The Bourne Conservation Trust.  Recently paved service roads along The Cape Cod Canal provide salt-air vistas and path for walking, jogging, and bicycling.

Bourne is home to one of New England’s largest and most popular butterfly habitats, at Butterflies of Cape Cod. The enclosed habitat is home to a wide variety of native butterflies, large and small, and almost all intricately patterned.

The Buzzards Bay village features Ryan Family Amusements. Bowling, a carousel, and a full arcade are among the draws at this great family destination.

The Somerset Creamery has been family-owned and operated in Bourne since 1937, and still serves handmade, old-fashioned ice cream made from the original recipes and with the freshest ingredients. The ice cream at Somerset Creamery is made fresh daily.

With hundreds of slips and moorings, Kingman Yacht Center is the biggest Marina in Cape Cod. The Bourne and Sagamore bridges loom on the horizon and offer breathtaking views of the Cape Cod Canal. Man-made over a century ago, the canal allowed mariners and shipping merchants to move fluidly from Cape Cod to Boston and back. Camping, fishing, and other outdoor activities are plentiful along the Canal.

Bourne is one of Cape Cod’s seafood meccas. For dining, the most popular destinations are The Seafood Shanty, Mezza Luna Restaurant (Italian Cuisine), Eastwind Seafoods, and Sandy’s Famous Seafood Restaurant.

Bourne is different from its bustling, busy Cape Cod cousins. It doesn’t depend as much on attracting tourists and is more of a bedroom community than are nearby Falmouth and Mashpee. But living in Bourne still provides all the advantages and luxuries of living on Cape Cod, plus an easier commute.

Finding the right real estate agency and sales agent to represent you (and get the job done) shouldn’t be a personality contest or decided by who charges the smallest fee – but a careful, deliberate process that compares the agent’s expertise, professionalism, AND specific marketing plan. Additionally, what resources are provided and available to the agent that will give your home a distinct, competitive advantage in an ever-changing marketplace?

The choice is clear…

It takes a great agency but an even greater agent to effectively market and SELL your home. As you compare real estate companies and agents, also compare their marking plans. How is it different? Better? Does it single out your home from others also on the market?